Libran scored his third successive feature race win when he wore down his rivals to take out the Group 2 $300,000 Chairman’s Handicap (2600m).

Despite Libran’s narrow winning margin, he was impressive enough to retain favouritism for the Group 1 $2 million Sydney Cup (3200m) next Saturday.

“He’s my new favourite horse this bloke,’’ Avdulla said. “This year I’m very grateful Chris has given me the opportunity to ride such a talented stayer. I’ve been with this horse from day dot and he progressively just gets better and better, he’s attitude is getting better and better and today he went like a dead set two miler.

“He’s a little marvel, he’s my little champion at the moment.’’
The Chairman’s was run at a pedestrian pace early and the overall winning time was eight seconds outside the course record.

Zac Purton on Café Society turned the staying test into a sprint home and Libran, shouldering 58kg and conceding weight to all his rivals, was left a little flat-footed from the 600m.

But Libran continued to grind away, slowly gaining momentum before finishing strongly to win narrowly and impressively.

Libran, winner of the Randwick City Stakes and Manion Cup at his previous two starts, escapes a penalty for his Chairman’s Handicap win and drops 6kg to 52kg for the Sydney Cup.

Trainer Chris Waller has a powerful entry in the Sydney Cup next Saturday with Libran and stablemate Who Shot Thebaman joint favourites at $3.50 with 6 rites at ovutrites e Babtaurt oersire ChriDespite the narrow winning margin, Libran did enough to retain Sydney Cup favouritism at $3.50 with stablemate Who Shot The Barman. Another Waller-trained stayer and last year’s Cup winner Grand Marshal is next at $6.

“Libran gets a big drop in the weights for the Sydney Cup,’’ Waller said. “In a few of his runs he has raced a bit keen over shorter distances so the key is to switch him off which he did really well today.’’

18/03/16
Libran (Highclere Racing) winner The 2016 NE Manion Cup, Rosehill, GROUP 3, Aus(photo right by Steve Hart)
What the jockeys said
RESULT
Video
Jumping odds on favourite after defeating a number of the same opposition he faced on Saturday when winning the Randwick City Stakes, Libran didn’t disappoint with the gelding a two length winner of the Irresistible Pools Manion Cup (2400m).

Whilst somewhat wayward over the final stages, the UK import was still a class above placegetters Café Society and Another Cocktail.

“I would just like to see him switch off more again that’s now the big thing towards the Sydney Cup hence the reason we will probably run again in the Chairman’s the week before the Sydney Cup,” Waller said.

In the small field hampered by scratching’s, the son of Lawman was able to settle in the one out one back position for Avdulla.

“When I was there and was able to pop off down the mile I was always in control. I had to slow him down at about the 1000m because I was always going so well,”Avdulla said.

He produced a strong claim outside the lead on straightening and once stoked up was able to sprint strongly to win by two lengths on Cafe Society with Gallante a ½ length of him in third.

“He has probably got a bit more dour in him, Chris is starting to pour the work into him. He (Chris Waller) is a top class trainer and there is just a sense of timing about him. He is on the limit (weight) in the Cup and he was pretty good today, ” Brenton Avdulla said.

The Sydney Cup is due to run on day two of the Championships at Royal Randwick on April 9 for which Libran now the $3.50 favourite with tab.com.au. 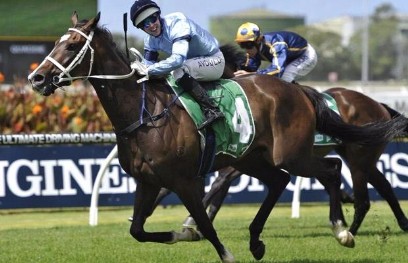 We wish him every success.

Previously owner by Guy Reed, Cool Luke was exported to Sweden, he has gone on to win 2 races at Taby in 2012/13 for his new trainer Ryszard Borko

Red Dancer previously named Elnadancer took the Wyndham Handicap at Happy Valley, Hong Kong,  HK$ 950.000
He was a credit to the yard and please that he is fulfilling his new owners expectations. 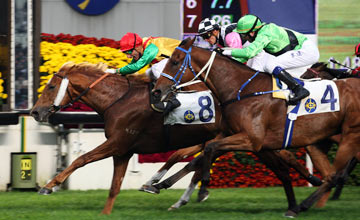 April 21st 2012
Supreme Flight  won the Dedication to the Community Stakes Handicap, HK$900,000 at Sha Tin (winner HK$513,000 – £43,000)
Supreme Flight (name changed from Silver Trees) was sold to Hong Kong after winning at Haydock on his debut in 2010, then finished second in the Acomb Stakes, GP2. Supreme Flight is now trained by A T Millard

January 2012
LOUKAS landed a valuable allowance race at Santa Anita,
A promising juvenile who had lost his maiden tag on second asking at Ayr, was then sold to race in the USA. He had made his debut there a couple of months later, in the coveted Norfolk Stakes Gr.1, where he had finished an honourable fifth. This victorious 2012 return shows the bay colt is back on top of his game, winning the $58,000 Allowance by a comfortable length and a quarter. 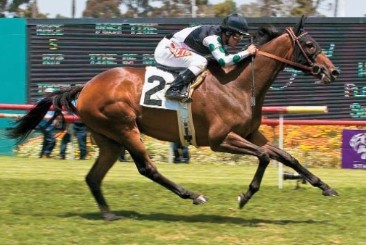 Formal Decree capitalizes on lead 25/10/08
American Form with video
ELMONT, N.Y. – Taking full advantage of his inside post and a crafty ride from veteran Jean-Luc Samyn, Formal Decree stole Saturday’s 49th running of the $111,400 Knickerbocker Handicap in broad daylight on a blustery afternoon at Belmont Park.

Formal Decree seized control of the 1 1/8-mile race through a leisurely opening quarter-mile in 24.93 seconds, got a half-mile in 48.31 seconds, turned back brief challenges through a sharp third quarter in 22.64 seconds into the far turn, and sprinted away through the stretch to win the Grade 3 stakes by three lengths over late-rallying Strike a Deal. Buffalo Man was a neck farther back in third, and Proudinsky finished a dull fourth as the 13-10 favorite.